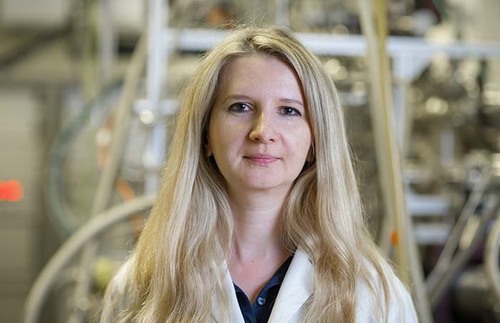 Ionizing radiation, the type of radiation we’re exposed to while embarking on a trans-Atlantic flight or taking X-ray in clinics, can cause much damage to cells. This damage is initiated by production of a high abundance of low-energy electrons. One Notre Dame researcher has been studying the role of these electrons to determine how they are involved in the fragmentation of biomolecules.

Sylwia Ptasinska, associate professor of physics who is affiliated with the Notre Dame Radiation Laboratory, Harper Cancer Research Institute, and ND Energy, published research in Physical Review Letters that begins to explain how low-energy electrons cause damage to DNA and proteins, molecules of life. She and her collaborators selected three formamide molecules to serve as models for proteins.

A process called Dissociative Electron Attachment (DEA) plays a key role in radiation damage. The first step has been thought to be from resonant electron capture, where a compound attaches to form a radical anion – an ion with more electrons than protons. Using mass spectrometry, a technique that converts molecules to ions so they can be moved and manipulated by electrical and magnetic fields, the team observed resonant electron capture by the formamide molecules. This showed a similar fragmentation pattern for amide bond disruption in each of the molecules.  This observation caused the researchers to search for a common process that not only is involved in fragmentation of these model molecules, but also in large proteins which contain the amide bonds.

They considered four different channels of electron capture to determine which mechanism lead to the fragmentation. Ksenia Bravaya, of Boston University, completed calculations to assist, and through the process, the team determined that dipole-bond supported core-excited electronic resonances were the cause in the model molecules tested. This was the first time this process was proposed to explain the fragmentation of biomolecules.

This combined experimental and computational investigation showed that research into fundamentals of how molecules fragment may eventually lead to further understanding of how low-energy radiation damages cells, or even how it causes cancer.

The research was supported by the U.S. Department of Energy and the National Science Foundation. In addition to Bravaya, other collaborators included Ian Carmichael, director of the Notre Dame Radiation Laboratory and professor in the Department of Chemistry and Biochemistry, as well as Zhou Li ’17 Ph.D., and former postdoctoral researchers Michele Dawley and Michal Ryszka.

Originally published by Deanna Csomo McCool at science.nd.edu on May 10, 2019.