Zoltan Toroczkai, professor of theoretical physics, recently received an international collaborative grant from the National Science Foundation’s (NSF) Division of Intelligent Information Systems for research on brain neuronal networks. The project is aimed at discovering the fundamental principles of connectivity in the neuronal network of the neocortex and it is in collaboration with Henry Kennedy from the Stem-cell and Brain Research Institute in Lyon, France, with Toroczkai, as the lead principal investigator. 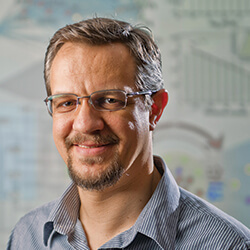 The neocortex is the part of the mammalian brain that is responsible for higher order functions, such as sensory perception, motor skills, spatial reasoning, conscious thought, and language for humans. As its functions suggest, the neocortex is the most recently evolved part of the cortex and it supports massive computations. “By capturing the fundamental structural and dynamical features in large-scale neuronal networks across several species, this project will help with our understanding of information processing in the human brain. It will also inform the emerging field of neuromorphic engineering, which focuses on bio-inspired computational devices,” Toroczkai said.

Toroczkai also hopes that his research will lead to advances in the understanding of mental disorders and brain injuries. “Society faces an increasing burden from the prevalence of neuro-degenerative diseases. There is growing evidence suggesting that disease progression often occurs via the breakdown of high-centrality, long-range connections between cortical areas of the connectome—to be characterized within this project—with significant consequences on mental health and behavior,” Toroczkai said.

Toroczkai first got involved in research with Kennedy and his French team in 2008. “Dr. Kennedy contacted me in the summer of 2008 to ask whether I’d be interested in helping them with network analysis of the data they have been generating from macaque brains using tract-tracing experiments,” Toroczkai said. “Indeed, when plotting such connectivity data generated by experiments, due to its complexity, it looks like a hopeless and messy hair-ball and extracting useful information from such datasets is usually a difficult task, requiring specialized tools and approaches, something that we were working on already for several years, on other network projects.” Since then, their partnership has blossomed, with papers published in numerous journals, including Science, Neuron, PNAS, Cerebral Cortex, and PLOS Biology.

This current NSF-funded project will run through September 2020.