Thermography, the use of infrared (IR) radiation to see what’s invisible to the human eye, has increased dramatically in the last half century. Thermograms detect the long-wavelength radiation emitted by an object — a signature that increases with the temperature of that object. Some of the most well-known applications are instances where first responders use thermography to see through smoke or conduct search-and-rescue missions. Other applications include use by building and construction technicians to locate overheating power lines or heating units, as well as medical diagnostics and military applications. Most recently, the technology is being applied to atmospheric research, biological sensing and self-driving cars to help them avoid other vehicles or pedestrians crossing the street. 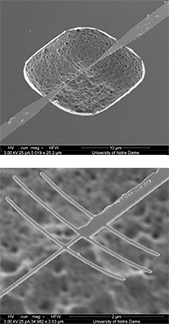 Problems in using thermal imaging have ranged from issues related to fixed integration/exposure time for the infrared detectors to the fact that they could not operate at room temperature.

Led by Szakmany, visiting assistant research professor of electrical engineering, the team based their work on the use of nanoscale antennas, much like those found on a TV set or radio but many thousands of times smaller. The electric field of the IR light causes electrons to move, in this case, on a metal antenna that is only a few microns long and less than a twentieth of a micron wide. (A human hair is about 100 microns wide.) The electron current heats the antenna, and that heat is converted to an electrical signal via a nanothermocouple placed at the center of the antenna.

The novel aspect of the team’s work is the development of a cavity over which the antenna is suspended. This cavity collects and reflects the IR light and bounces it back up to the antenna, increasing its sensitivity approximately 100X more than previous IR antenna designs. This is similar to dish antennas used to receive cable television signals or to radio telescopes like the supersensitive antenna located in Puerto Rico’s Arecibo Observatory. However, the infrared “dishes” developed at Notre Dame are 100 million times smaller in diameter than the Arecibo telescope dish and much smaller in size than what is currently used in industry.

The new nanoscale ND sensor can detect changes in IR radiation thousands of times faster than conventional IR detectors. It also functions well at room temperature, which is a unique and potentially valuable aspect of long-wavelength IR detectors. The suspended antenna-coupled nanothermocouples enable infrared detectors that are more sensitive, faster and easier to manufacture.

Because the length of the antennas can be selected to be sensitive over a very wide range of wavelengths, from a few microns to hundreds of microns, the ND team envisions making chips that contain a range of antenna sizes for simultaneously creating images at more than one wavelength, a technique called “multispectral” or “hyperspectral” imaging.

This work was funded by the Joseph F. Trustey Endowment for Excellence in Nanotechnology and the Center for Nano Science and Technology at Notre Dame.

Originally published by Nina Welding at conductorshare.nd.edu on July 31, 2019.